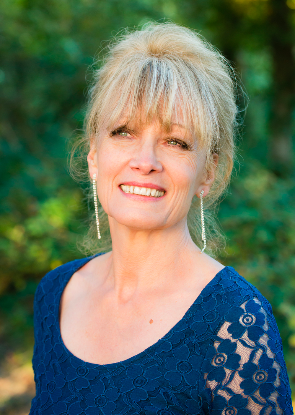 Lesley Broster Kinch was born Lesley Woodcock in Chiswick, London in 1952. She attended Hemel Hempstead Grammar School, Arts Educational School in Tring, London College of Fashion, Guildhall School of Music and Drama. Lesley has worked at Times Newspapers, Playboy Club, Polydor Records, Rocket Records and Virgin Records, before moving to South Devon where she is currently writing the sequel to “The Love of Money”, "The Root of all Evil”. When not writing, Lesley works selling olives in Totnes market and moonlights as a seamstress.

“I came from a middle-class English family with two cars and two televisions in the 1960's! Real keeping-up -with-the-Joneses! Behind the brilliant white, waterfall net curtains however was a family torn apart by affairs, cruelty, social awkwardness and mental ill-health.

A fabulous mixture in which to nurture an imagination. Escapism found me in the fields opposite my home building a den in a secret corner in which I was a fairy, a cowgirl, a princess waiting to be rescued...

In 1969, the family moved to London. Kensington was everything I'd seen on the television. Flower power, Hyde Park concerts, Led Zep, secret agents living in the mews behind our house, Kenny Market. It was intoxicating! I was in my fantasy element.

My real world consisted of  rape, fear, living in an alien environment after running off with a man 15 years my senior to live in the East End of London. Amazing jobs, meeting the rich and famous, concerts, working with top musicians and then meeting my ex-husband and having two amazing sons.

My life's experiences became the bedrock for my first novel, The Love of Money. The book contains graphic scenes of murder, rape and utter joy. These I've experienced first hand and can honestly say that none of what I've written is gratuitous.”